This guy owns 5,000 tuxedos. And if you're a man in Waltham, you've probably worn one of them… 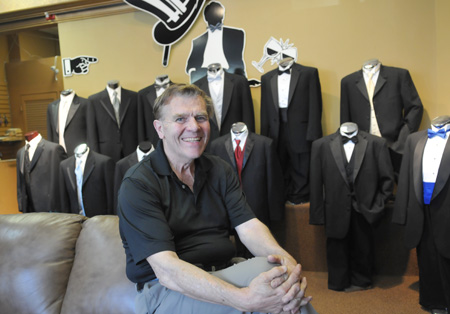 Jim McElroy laughed when I asked him if he owns a tuxedo. I guess my question was kind of dumb. McElroy, owner and operator of Formalwear Ltd., actually owns 5,000 tuxedos. What I meant was does he have one or many favorites at home in his closet. But that follow-up was also kind of dumb. Why would he, McElroy explained, when he can just come down to the shop and have his choice from the latest style to any of the classics.

McElroy didn't seem to mind my dumb questions which, of course, only encouraged me to ask more. After 40 years in the formal wear business, he's probably heard them all and tolerating them with good humor must be part of the customer service that has kept the Elm Street shop chugging along through the decades. In my opinion, he's in a pretty intriguing business really. Think of just the fashion changes he seen over those years.

“There was yellow, orange, blue … I have the archives in storage in the basement," McElroy said when I asked about how crazy colorful tuxes were in the seventies. “I wouldn't call it a museum but it is my own museum to how the business has changed over the years. There's a lot of dust on those. And there will continue to be dust on them."

McElroy (a lifelong Waltham guy, WHS Class of '63 and former school committee member and former assistant mayor during the William Stanley administration) bought the tuxedo business from a man looking to retire from his shop on Moody Street. The shop was originally called “Toppers" in reference to a popular Cary Grant film and then 50s sitcom starring Leo G. Carroll.

“I went into the shop looking to buy a used tux and got talking to the owner who said he looking to sell the place," McElroy said, adding that the asking price was $2,000. He only had $1,750 but luckily won a coin toss for the last $250. “I ran it for a year on Moody Street and then moved it up here. In 1973, the name Toppers had lost its cache so I changed the name after the move."

“I was looking for something entrepreneurial," said McElroy, who attended Brown and then was pursuing a master's in rehabilitation management at Northeastern when he decided to take on the business. “It became a fascinating thing to me to have my own business and see if I could make it grow. The marketing, the outreach to customers, keeping up with the fashion trends. It's not as simple as you might think."

McElroy says his timing was good for getting into formal wear rentals. Both the wilder party years of the seventies and then the more conservative Reagan 80s brought people in for tuxedos.

“The tuxedo business was really emerging in the 70s and early 80s," McElroy said.

The past decade plus however has seen a trend away from tuxedos, and formal wear in general, as work and functions have become much more casual.

“Thank god the prom business is still strong. It is still a rite of passage," McElroy said. “The wedding business has kind of suffered over the years."

And right now, the month of May, is the prom season and McElroy is being pulled in many directions. Whether it's fielding calls from anxious mothers bringing their sons in for emergency fittings, making sales calls to local high schools or feeling the pull to end an interview to help his son John get hundreds of tuxes cleaned and ready for pickup, he's stretched.

“I'm one of the last independents in the business and it's been a tough fight," McElroy said. “How I market myself is that you deal with the owner here. I answer the phone 24/7. And after 40 years in the business, I have a feel for the colors and styles and the fit. I know how to make that jacket look perfect on you, the pants look good over the shoes. It's the subtleties that take experience and a good eye to get just right."

And unlike the big chains, McElroy said his shop can turn quickly to offer the newest trends in formal fashions. On that front, McElroy said we could be seeing more rounded Tony Martin-style lapels and that after years with long ties, the bow tie is making a fast comeback.

“The bow tie was down and out over the past five years or so," he said. “But at the last Academy Awards, every guy was wearing one. Now everybody wants them!"

Before I let McElroy run off to deal with orders I asked one last dumb question that I was sure he'd find offensive to the tastes of his business. I wanted his take guys wearing sneakers with their tuxedos.

“No, no that doesn't bother me," McElroy said as he laughed it off. “The kid's parents may not like it much, but I like that the kids are trying to express themselves. It keeps me on the forefront of fashion."

McElroy added that he's not looking to retire anytime soon.

“This is a fun business. It's kept me motivated through all these years and it is definitely something I can see myself doing into my 7os and 80s if I can stay healthy," he said.

You can read the article online here.